ITC Officina Display und ihre Herkunft.
When we (Ben Acornley and myself at MetaLondon) redesigned The Economist magazine in London in 2000/2001 (the new magazine was launched in May 2001,) we picked ITC Officina Sans as the “information” face. All text is set in the Economist’s own typeface, which Ole Schäfer and myself redesigned for the relaunch. But all the graphs, tables, sidebars and captions are set in ITC Officina Sans for contrast and clarity. When it came to using that face on the cover in fairly large sizes, the client deemed it a little too “goofy”. Officina’s blunt edges, its explicit pseudo-serifs and oblique terminals were indeed very noticeable in the Bold and Black weights they were using for the cover. 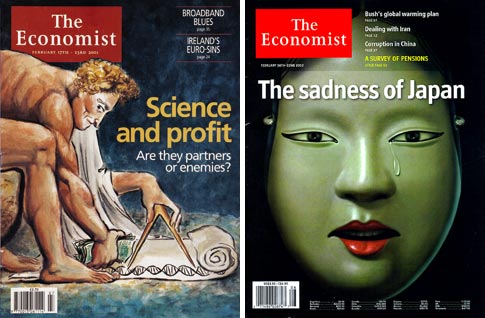 The display version I sketched out had sharp corners, the terminals are not as oblique, and the swings at the top left of the characters have all but gone. This allows the face to be set much more tightly and doesn’t draw too much attention to individual letters. Ole Schäfer had already expanded the original family of Book and Bold while at college and presented me his designs for comments and corrections. Out of or collaboration came the extended family with Medium, ExtraBold and Black weights, plus Small Caps and Italics, Old Style figures – the works.
Ole also did the initial digital work on the new Officina Display for The Economist. After two years’ exclusive use by that magazine, I decided to update the display family to include a Light version. The digital work was carried out by Christian Schwartz who used an extrapolated version that FontBureau had previously done for a client. Christian then improved the overall appearance of the Regular, Bold and Black weights and added a new Dingbat font. Officina Display now has the same x-height across all 4 weights. Ascenders, descenders and cap height have also been harmonized. In text faces, that would constitute a cardinal sin, as bolder weights tend to look smaller because of their reduced counter spaces. In display use, however, it is important to be able to compose word-sets and headlines with mixed weights. Nothing would be sillier than having to fix individual sizes in order to achieve maximum impact.

A hilariously relatable dramatization of what it’s often like for me to walk in LA or ATL.

"40,000 Americans died last year using this organization's products, and there aren't any changes in design or enforcement."

"That's not fair because management did offer sincere thoughts and prayers in a press release."